Mortality And Those Faithful Dogs

I have had a number of animal pets in my lifetime, each one having it’s own unique character and personality that sets it apart from the others. Cats are selfish in nature and always act very independent in spite of the fact that they are not, they will cozy up to their human only when it suits them. Dogs on the other hand understand their dependent relationship to their master and when they bond to their human, it is a lifetime commitment. A person’s pet dog will often convey the best examples of the nature of the unconditional love of God to their owner. When we accidentally do them harm or forget to feed them, they never hold a grudge and forgive us right away regardless of how badly we have hurt them.

Until recently I had a beautiful Border Collie named “Cody”. He was twelve years old when he suffered a massive stroke and died. It was a heart breaking and crushing event for us as this dog was the furry personification of devotion, commitment and unconditional love. His eyes were always on me, I could tell that he adored me as I recalled how he never left my bedside for the three days I was bedridden while recovering from a surgical procedure. I wondered why his lifespan couldn’t have been more like that of a human as it seems so unfair to see these wonderful animals die so early in our own lives, but then we must realize that God uses this as a reminder of our own mortality lest we forget that the end of our own stay here is never far off. 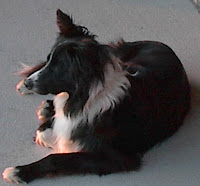 I pondered these things when Cody was still with me and recall how he was pleased to have any scrap that may have fallen from the table, and was struck by this event recorded in (Matthew 15: 21 - 28) And Jesus went away from there and withdrew to the district of Tyre and Sidon. And behold, a Canaanite woman from that region came out and cried, “Have mercy on me, O Lord, Son of David; my daughter is severely possessed by a demon.” But he did not answer her a word. And his disciples came and begged him, saying, “Send her away, for she is crying after us.” He answered, “I was sent only to the lost sheep of the house of Israel.” But she came and knelt before him, saying, “Lord, help me.” And he answered, “It is not fair to take the children’s bread and throw it to the dogs.” She said, “Yes, Lord, yet even the dogs eat the crumbs that fall from their masters’ table.” Then Jesus answered her, “O woman, great is your faith! Be it done for you as you desire.” And her daughter was healed instantly.

Jesus was again impressed by the faith of a Roman centurion, the Romans were normally hated by the Jews.
(Luke 7: 2 - 10) Now a centurion had a slave who was dear to him, who was sick and at the point of death. When he heard of Jesus, he sent to him elders of the Jews, asking him to come and heal his slave. And when they came to Jesus, they besought him earnestly, saying, “He is worthy to have you do this for him, for he loves our nation, and he built us our synagogue.” And Jesus went with them. When he was not far from the house, the centurion sent friends to him, saying to him, “Lord, do not trouble yourself, for I am not worthy to have you come under my roof; therefore I did not presume to come to you. But say the word, and let my servant be healed. For I am a man set under authority, with soldiers under me: and I say to one, ‘Go,’ and he goes; and to another, ‘Come,’ and he comes; and to my slave, ‘Do this,’ and he does it.” When Jesus heard this he marveled at him, and turned and said to the multitude that followed him, “I tell you, not even in Israel have I found such faith.” And when those who had been sent returned to the house, they found the slave well.

The dynamic had changed when the Lord saw the level of faith and desire for His salvation in the lives of ordinary Gentiles, those for whom the promise was not intended and is evidenced in his lamentation over Jerusalem.
(Matthew 23: 37 - 39) “O Jerusalem, Jerusalem, killing the prophets and stoning those who are sent to you! How often would I have gathered your children together as a hen gathers her brood under her wings, and you would not! Behold, your house is forsaken and desolate. For I tell you, you will not see me again, until you say, ‘Blessed is he who comes in the name of the Lord.”

I can’t boast of being a member of the twelve tribes of Israel, so these scripture verses are exceedingly meaningful to myself and all gentiles who share the hope of being grafted into the tree of life. Paul clarifies this in his letter to the Roman Christians,

(Romans 11: 16 - 18) "If the dough offered as first fruits is holy, so is the whole lump; and if the root is holy, so are the branches. But if some of the branches were broken off, and you, a wild olive shoot, were grafted in their place to share the richness of the olive tree, do not boast over the branches. If you do boast, remember it is not you that support the root, but the root that supports you."

Even dogs have a capacity for great faithfulness and love for He who loves them!

Email ThisBlogThis!Share to TwitterShare to FacebookShare to Pinterest
Labels: " Evern the dogs eat the crumbs that fall from their master's table, A beautiful Border Collie named "Cody, I am a man set under authority, Luke 7: 2 - 10, Psalm 8