The Mystery Of Babylon

What is the shared significance of the ancient ziggurat known as the Tower of Babel and later the Babylonian Empire and most recently the World Trade Center?

The Tower of Babel 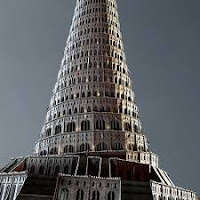 Modern scholars have associated the Tower of Babel with known structures, notably a ziggurat dedicated to the Mesopotamian god Marduk by Nabopolassar, the king of Babylonia circa 610 BCE, the Great Ziggurat of Babylon.

Now the whole earth had one language and few words. And as men migrated from the East, they found a plain in the land of Shinar and settled there. And they said to one another, “Come, let us make bricks, and burn them thoroughly.” And they had brick for stone, and bitumen for mortar. Then they said, “Come, let us build ourselves a city, and a tower with its top in the heavens, and let us make a name for ourselves, lest we be scattered abroad upon the face of the whole earth.” And the Lord came down to see the city and the tower, which the sons of men had built. And the Lord said, “Behold, they are one people, and they have all one language; and this is only the beginning of what they will do; and nothing that they propose to do will now be impossible for them. Come, let us go down, and there confuse their language, that they may not understand one another’s speech.” So the Lord scattered them abroad from there over the face of all the earth, and they left off building the city. Therefore its name was called Babel, because there the Lord confused the language of all the earth; and from there the Lord scattered them abroad over the face of all the earth.(Genesis 11: 1-9)

The city of Babylon was situated on the banks of the Euphrates River, the remains of the oldest city are below groundwater level. From written sources, however, we know that the city became important after the fall of the empire of the Third dynasty of Ur, when the Amorites had invaded the area.The Greek word Babylon is a rendering of Babillu, a very old word in an unknown language. When Mesopotamia was infiltrated by Akkadians and Amorites who spoke a Semitic language, they recognized their own words Bâb ("gate") and ili ("gods") and concluded that this place was "the gate of the gods".
King Nebuchadnezzar the son of Nabopolassar ruled from 605 to 562 and is credited with rebuilding his capital as the most splendid city in the Mid-East. It was during his reign that he magnified himself before God and as a result was rendered temporarily insane for a period.

All this came upon King Nebuchadnez′zar. At the end of twelve months he was walking on the roof of the royal palace of Babylon, and the king said, “Is not this great Babylon, which I have built by my mighty power as a royal residence and for the glory of my majesty?” While the words were still in the king’s mouth, there fell a voice from heaven, “O King Nebuchadnez′zar, to you it is spoken: The kingdom has departed from you, and you shall be driven from among men, and your dwelling shall be with the beasts of the field; and you shall be made to eat grass like an ox; and seven times shall pass over you, until you have learned that the Most High rules the kingdom of men and gives it to whom he will.” Immediately the word was fulfilled upon Nebuchadnez′zar. He was driven from among men, and ate grass like an ox, and his body was wet with the dew of heaven till his hair grew as long as eagles’ feathers, and his nails were like birds’ claws. (Daniel 4: 28-33)

The partial answer to our original question is this: The Tower of Babel was the result of the pride of a united people that spoke one language and who were determined to build a tower for themselves that would allow them to reach great heights. What happened at Babylon was essentially no different. A great city composed of people from many nations speaking one tongue both represented but a shadow of things to come. The key word here is “Pride.”

“In the pride of his countenance the wicked does not seek him; all his thoughts are, “There is no God.”(Psalm 10-4)

Pride goes before destruction, and a haughty spirit before a fall.
(Proverbs 16:18) 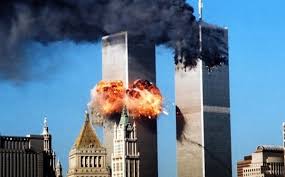 The twin towers of downtown Manhattan’s World Trade Center were a triumph of human imagination and will. Completed in 1973, the towers stood at 110 stories each, accommodating 50,000 workers and 200,000 daily visitors in 10 million square feet of space. They were the hub of the bustling Financial District, a top tourist attraction and a symbol of New York City’s–and America’s–steadfast devotion to progress and the future. Clearly there is much pride and hubris evident in the preceding comments! On September 11, 2001, the World Trade Center became the target of a massive terrorist attack that took the lives of nearly 3,000 people. The disaster also radically altered the skyline of New York City, destroying the twin columns of glass and steel that over the years had come to embody the city itself. The impact of the two planes that hit the World Trade Center towers on September 11, 2001, was more devastating than any of the building’s designers and engineers had ever imagined.
The World Trade Center represented all the nations of world working together and speaking in one unified tongue, controlling the world markets under the flag of a nation having great aspirations, that reach even above the stars. The destruction of the Wold Trade Center was only the beginning of a coming event spoken of in (Revelation Ch.17 & 18) the fall of Babylon the Great! We should read those chapters in light of what we understand so far with an open mind, asking God to reveal His will for each of us, asking Christ to be our Lord and Savior.
Consider that God’s foreshadowing of events is His way of piquing man’s curiosity in order to get him to search for God in all earnestness and find the true reason for that which He has in store for us. (Ecclesiastes 1:9 -10) What has been is what will be, and what has been done is what will be done; and there is nothing new under the sun. Is there a thing of which it is said, “See, this is new?” It has been already, in the ages before us.
Babel and Babylon in Ur of Chaldea, were just a foreshadowing of a much greater future event, just as the sacrificial offerings of sheep and goats were a foreshadowing of the death and resurrection of Christ for the sins of mankind.

The second part of the answer to the original question is found in God’s condemnation of Lucifer for his pride and wanton disobedience. His is the same spirit that drives men to seemingly great endeavors that always results in pridefulness, hubris and arrogance in the face of God which He hates.

How you are fallen from heaven, O Day Star, son of Dawn!
How you are cut down to the ground, you who laid the nations low!
You said in your heart, ‘I will ascend to heaven; above the stars of God
I will set my throne on high; I will sit on the mount of assembly in the far north; I will ascend above the heights of the clouds, I will make myself like the Most High.’ But you are brought down to Sheol, to the depths of the Pit.

Email ThisBlogThis!Share to TwitterShare to FacebookShare to Pinterest
Labels: 4:28-33, King Nebuchadnezzar Dan, The city of Babylon, The mystery of Babylon Genesis 11: 1-9, The World Trade Center