The nations of the world are all currently embroiled in great internal and external strife. Most of it is meaningless in terms of eternity and is always based on petty jealousies, envy and the same evil mentality that drove Cain to murder his brother Able and it only serves to obscure mankind from the advent of the greatest event in world history. As I write this Turkey is arising once again as a major political and military force in Central Asia. Turkish President Erdogan is moving his nation from a Secular Democracy to an Islamic Theocracy and attempting to assert political influence over the Euro-Asian world. He is intent on reestablishing the former Ottoman Empire and it’s control over Europe and Asia. The leadership of the European Union and Nato are ineffectual against hegemony by aggressive nations, the only effective deterrence at this time would normally be the United States which is embroiled in it’s own violent domestic affairs and may be the target of a nuclear strike by China and a number of other Rogue nations. It appears that the clock is ticking and time is right for all these things to take place.

It’s important to know the current names of nations mentioned in the following prophecy rather than by their ancient names in order for it to make sense. Also that the implements of warfare as described were common at the time of the prophesy, the reader should understand that Ezekiel was referring to a latter day event which thus far has not transpired and that the armies mentioned will have modern armaments and equipment.The names of the nations and states that will be arrayed against Israel are as follows:

The word of the Lord came to me: “Son of man, set your face toward Gog, of the land of Magog, the chief prince of Meshech and Tubal, and prophesy against him and say, Thus says the Lord God: Behold, I am against you, O Gog, chief prince of Meshech and Tubal; and I will turn you about, and put hooks into your jaws, and I will bring you forth, and all your army, horses and horsemen, all of them clothed in full armor, a great company, all of them with buckler and shield, wielding swords; Persia, Cush, and Put are with them, all of them with shield and helmet; Gomer and all his hordes; Beth-togar′mah from the uttermost parts of the north with all his hordes, many peoples are with you.

“Be ready and keep ready, you and all the hosts that are assembled about you, and be a guard for them. After many days you will be mustered; in the latter years you will go against the land that is restored from war, the land where people were gathered from many nations upon the mountains of Israel, which had been a continual waste; its people were brought out from the nations and now dwell securely, all of them. You will advance, coming on like a storm, you will be like a cloud covering the land, you and all your hordes, and many peoples with you.

“Thus says the Lord God: On that day thoughts will come into your mind, and you will devise an evil scheme and say, ‘I will go up against the land of unwalled villages; I will fall upon the quiet people who dwell securely, all of them dwelling without walls, and having no bars or gates’; to seize spoil and carry off plunder; to assail the waste places which are now inhabited, and the people who were gathered from the nations, who have gotten cattle and goods, who dwell at the center of the earth. Sheba and Dedan and the merchants of Tarshish and all its villages will say to you, ‘Have you come to seize spoil? Have you assembled your hosts to carry off plunder, to carry away silver and gold, to take away cattle and goods, to seize great spoil?’

“Therefore, son of man, prophesy, and say to Gog, Thus says the Lord God: On that day when my people Israel are dwelling securely, you will bestir yourself and come from your place out of the uttermost parts of the north, you and many peoples with you, all of them riding on horses, a great host, a mighty army; you will come up against my people Israel, like a cloud covering the land. In the latter days I will bring you against my land, that the nations may know me, when through you, O Gog, I vindicate my holiness before their eyes. 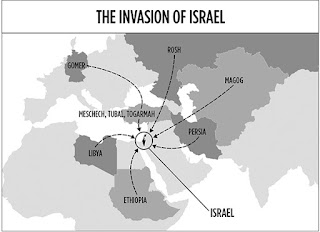 “Thus says the Lord God: Are you he of whom I spoke in former days by my servants the prophets of Israel, who in those days prophesied for years that I would bring you against them? But on that day, when Gog shall come against the land of Israel, says the Lord God, my wrath will be roused. For in my jealousy and in my blazing wrath I declare, On that day there shall be a great shaking in the land of Israel; the fish of the sea, and the birds of the air, and the beasts of the field, and all creeping things that creep on the ground, and all the men that are upon the face of the earth, shall quake at my presence, and the mountains shall be thrown down, and the cliffs shall fall, and every wall shall tumble to the ground. I will summon every kind of terror against Gog, says the Lord God; every man’s sword will be against his brother. With pestilence and bloodshed I will enter into judgment with him; and I will rain upon him and his hordes and the many peoples that are with him, torrential rains and hailstones, fire and brimstone. So I will show my greatness and my holiness and make myself known in the eyes of many nations. Then they will know that I am the Lord.

Considering how fragile and unsettling the future looks for so many in various places throughout the world one would think that it might be prudent to make amends with the Lord and establish a permanent place on the right side of God in eternity.

“When the Son of man comes in his glory, and all the angels with him, then he will sit on his glorious throne. Before him will be gathered all the nations, and he will separate them one from another as a shepherd separates the sheep from the goats, and he will place the sheep at his right hand, but the goats at the left.” (Matthew 25:31-33)

Take an inventory of your life and admit to God that you are a sinner and have fallen short of His perfection, ask Jesus to come into your life and forgive your sins and give you a new and eternal future.

because, if you confess with your mouth that Jesus is Lord and believe in your heart that God raised him from the dead, you will be saved. For with the heart one believes and is justified, and with the mouth one confesses and is saved. For the Scripture says, “Everyone who believes in him will not be put to shame.” For there is no distinction between Jew and Greek; for the same Lord is Lord of all, bestowing his riches on all who call on him. For “everyone who calls on the name of the Lord will be saved.”