How Shall We Then Live? 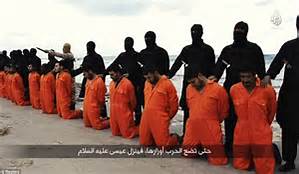 We are living in fast moving and very frightening times where unpleasantries can overwhelm us without a moment’s notice. There was a time not long ago when Christians found the concept of being beheaded for one’s faith as something that happened in past centuries unconscionable in modern twentieth century civilization. And yet with the dawn of Arab Spring, the political destabilization of the Middle-East and North African countries, it has become an all too common occurrence, Christians are being slaughtered for their faith. Several years ago I had a conversation with an older Christian man concerning the “Great Tribulation.” He was clinging to the popular view that nothing bad will happen to Christians in the latter times in which we live and that the church will be taken up and spared any tribulation. Unfortunately he was laboring under a popular heretical delusion, because the Great Tribulation is all about horrible events and testing that true believers will endure in the latter times including martyrdom before the return of Christ. It is arrogant to believe that modern day Christians will somehow escape the persecutions endured by all the saints from the first century church and down through the ages when one asks, did God love them any less? Consider the following excerpts from the Book of Revelation in context with the persecution and martyrdom currently going on in the Middle-East and North African nations. 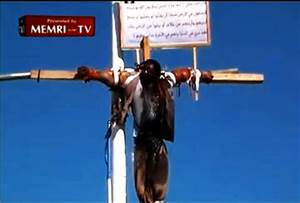 (Revelation 6: 7 - 11) When he opened the fourth seal, I heard the voice of the fourth living creature say, “Come!” And I saw, and behold, a pale horse, and its rider’s name was Death, and Hades followed him; and they were given power over a fourth of the earth, to kill with sword and with famine and with pestilence and by wild beasts of the earth. When he opened the fifth seal, I saw under the altar the souls of those who had been slain for the word of God and for the witness they had borne; they cried out with a loud voice, “O Sovereign Lord, holy and true, how long before thou wilt judge and avenge our blood on those who dwell upon the earth?” Then they were each given a white robe and told to rest a little longer, until the number of their fellow servants and their brethren should be complete, who were to be killed as they themselves had been. 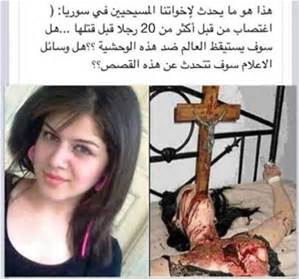 (Revelation 7: 9 - 14) After this I looked, and behold, a great multitude which no man could number, from every nation, from all tribes and peoples and tongues, standing before the throne and before the Lamb, clothed in white robes, with palm branches in their hands, and crying out with a loud voice, “Salvation belongs to our God who sits upon the throne, and to the Lamb!” And all the angels stood round the throne and round the elders and the four living creatures, and they fell on their faces before the throne and worshiped God, saying, “Amen! Blessing and glory and wisdom and thanksgiving and honor and power and might be to our God for ever and ever! Amen.” Then one of the elders addressed me, saying, “Who are these, clothed in white robes, and whence have they come?” I said to him, “Sir, you know.” And he said to me, “These are they who have come out of the great tribulation; they have washed their robes and made them white in the blood of the Lamb.

So then considering all this, then how shall we then live? The answer is found in the Apostle Paul’s letter to the Ephesians.
(Ephesians 6: 10 - 13) Finally, my brethren, be strong in the Lord and in the power of His might. Put on the whole armor of God, that you may be able to stand against the wiles of the devil. For we do not wrestle against flesh and blood, but against principalities, against powers, against the rulers of the darkness of this age, against spiritual hosts of wickedness in the heavenly places. Therefore take up the whole armor of God, that you will be able to withstand in the evil day, and having done all to stand.(Ephesians 6: 14 - 18) Stand therefore, having girded your waist with truth, having put on the breastplate of righteousness, and having shod your feet with the preparation of the gospel of peace; above all, taking the shield of faith with which you will be able to quench all the fiery darts of the wicked one. And take the helmet of salvation, and the sword of the Spirit, which is the word of God; praying always with all prayer and supplication in the Spirit, being watchful to this end with all perseverance and supplication for all the saints.

Therefore take up the whole armor of God, that you may be able to withstand in the evil day, and having done all, to stand.
Meaning to be knowledgeable memorizing scripture, living in the spirit of Christ, understanding that persecution and death come at the hands of those indwelled and moved by evil spirits. Keep in mind always that death holds no eternal sway over those who believe in and trust Jesus Christ and who are themselves eternal like Christ.

Stand therefore, having girded your waist with truth, having put on the breastplate of righteousness, and having shod your feet with the preparation of the gospel of peace; above all, taking the shield of faith with which you will be able to quench all the fiery darts of the wicked one.
Stand therefore is a command given to soldiers about to face the onslaught of a formidable enemy, stand means to not cower or back down or turn and run, stand! Having heard the gospel, understanding the truth about sinful mankind and the righteousness of God that He imparts to those who have taken on Jesus Christ as Savior and Lord, you have thus girded yourself with the truth and wear the breastplate of God’s righteousness that He has imparted through Christ. Next shod your feet with the Gospel of peace by learning to effectively proclaim the gospel and your faith in Christ to those who persecute you. The shield of faith is an unshakeable trust in God, and like our Lord who gave us His example during the temptation by Satan in the desert, respond to the evil one using scripture, the word of God. (Matthew 4: 3 - 4) And the tempter came and said to him, “If you are the Son of God, command these stones to become loaves of bread.” But he answered, “It is written, ‘Man shall not live by bread alone, but by every word that proceeds from the mouth of God.’”
The word of God is an all powerful weapon when used against the evil one.


(Hebrews 4: 12 - 13)  For the word of God is living and active, sharper than any two-edged sword, piercing to the division of soul and spirit, of joints and marrow, and discerning the thoughts and intentions of the heart. And before him no creature is hidden, but all are open and laid bare to the eyes of him with whom we have to do.
Posted by Joshua Stone - What Is at 3:20 PM

Email ThisBlogThis!Share to TwitterShare to FacebookShare to Pinterest
Labels: be strong in the Lord and in the power of His might., Eph 6 Finally my brethren, How Shall We Then Live? Revelation 6: 7 - 14) When he opened the fourth seal