The Passover In Easter

Passover which is celebrated the world over by Jews this year falls on April 23rd and is a religious holy day to some and to others simply a Jewish tradition. It is representative of a time long ago when the Hebrews were released from bondage in ancient Egypt. Passover and Easter are both celebrated in the Spring but rarely fall at the same time due to the differences between Jewish and Julian calendars.

(Exodus 12: 1 - 14)  Now the Lord spoke to Moses and Aaron in the land of Egypt, saying, “This month shall be your beginning of months; it shall be the first month of the year to you. Speak to all the congregation of Israel, saying: ‘On the tenth of this month every man shall take for himself a lamb, according to the house of his father, a lamb for a household. And if the household is too small for the lamb, let him and his neighbor next to his house take it according to the number of the persons; according to each man’s need you shall make your count for the lamb. Your lamb shall be without blemish, a male of the first year. You may take it from the sheep or from the goats. Now you shall keep it until the fourteenth day of the same month. Then the whole assembly of the congregation of Israel shall kill it at twilight. And they shall take some of the blood and put it on the two doorposts and on the lintel of the houses where they eat it. Then they shall eat the flesh on that night; roasted in fire, with unleavened bread and with bitter herbs they shall eat it. Do not eat it raw, nor boiled at all with water, but roasted in fire, its head with its legs and its entrails. You shall let none of it remain until morning, and what remains of it until morning you shall burn with fire. And thus you shall eat it: with a belt on your waist, your sandals on your feet, and your staff in your hand. So you shall eat it in haste. It is the Lord’s Passover. ‘For I will pass through the land of Egypt on that night, and will strike all the firstborn in the land of Egypt, both man and beast; and against all the gods of Egypt I will execute judgment: I am the Lord. Now the blood shall be a sign for you on the houses where you are. And when I see the blood, I will pass over you; and the plague shall not be on you to destroy you when I strike the land of Egypt. ‘So this day shall be to you a memorial; and you shall keep it as a feast to the Lord throughout your generations. You shall keep it as a feast by an everlasting ordinance.
(Vs 29 - 32)  And it came to pass at midnight that the Lord struck all the firstborn in the land of Egypt, from the firstborn of Pharaoh who sat on his throne to the firstborn of the captive who was in the dungeon, and all the firstborn of livestock. So Pharaoh rose in the night, he, all his servants, and all the Egyptians; and there was a great cry in Egypt, for there was not a house where there was not one dead. Then he called for Moses and Aaron by night, and said, “Rise, go out from among my people, both you and the children of Israel. And go, serve the Lord as you have said. Also take your flocks and your herds, as you have said, and be gone; and bless me also.”

Today Christians celebrate Easter which corresponds to Passover, an ancient harbinger of a much greater future event when God Himself provided the final answer to man’s bondage to sin and death in the person of God’s own Son Jesus Christ, the lamb without blemish and spot who willingly shed his own blood and died on a Roman cross, followed three days later by His miraculous resurrection thus becoming the firstborn of a dead human race and a new creation impervious to death and the hope of all mankind. 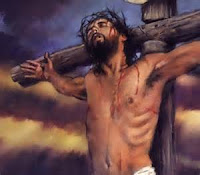 (Luke 23: 44 - 47) Now it was about the sixth hour, and there was darkness over all the earth until the ninth hour. Then the sun was darkened, and the veil of the temple was torn in two. And when Jesus had cried out with a loud voice, He said, “Father, ‘into Your hands I commit My spirit.’” Having said this, He breathed His last. So when the centurion saw what had happened, he glorified God, saying, “Certainly this was a righteous Man!”

According to (1 Kings 6:2) Solomon’s temple was 30 cubits high but Herod had increased the height to 40 cubits, according to the writings of Josephus, a first century Jewish historian. There is uncertainty as to the exact measurement of a cubit, but it is safe to assume that this veil was somewhere near 60 feet high. An early Jewish tradition says that the veil was about four inches thick. The book of Exodus teaches that this thick veil was fashioned from blue, purple and scarlet material and fine twisted linen. The temple veil separated the Holy of Holies from the worshipers and the chief priest himself was the only one to enter once a year and pour the blood of a lamb on the mercy seat thus rolling back the sins of Israel for a year.

Jesus speaking to the Samaritan woman:  (John 4: 21 - 24) Jesus said to her, “Woman, believe Me, the hour is coming when you will neither on this mountain, nor in Jerusalem, worship the Father. You worship what you do not know; we know what we worship, for salvation is of the Jews. But the hour is coming, and now is, when the true worshipers will worship the Father in spirit and truth; for the Father is seeking such to worship Him. God is Spirit, and those who worship Him must worship in spirit and truth.”

When Jesus died on that cross the veil in the temple was rent in two from top to bottom which was to signify that God will no longer meet with men in buildings built with human hands but would indwell all who received Him in spirit and in truth. The risen Christ has shed His own blood whereby we can mark the lintel and doorposts of our hearts.
(Revelation 3:20) “Behold, I stand at the door and knock. If anyone hears My voice and opens the door, I will come in to him and dine with him, and he with Me.” This is the true passover where all who receive Him pass from certain death to sin and enter into eternal life.


(Matthew 28: 1 - 7) Now after the Sabbath, as the first day of the week began to dawn, Mary Magdalene and the other Mary came to see the tomb. And behold, there was a great earthquake; for an angel of the Lord descended from heaven, and came and rolled back the stone from the door, and sat on it. His countenance was like lightning, and his clothing as white as snow. And the guards shook for fear of him, and became like dead men. But the angel answered and said to the women, “Do not be afraid, for I know that you seek Jesus who was crucified. He is not here; for He is risen, as He said. Come, see the place where the Lord lay. And go quickly and tell His disciples that He is risen from the dead, and indeed He is going before you into Galilee; there you will see Him. Behold, I have told you.”

(2 Corinthians 5: 17 - 21) Therefore, if anyone is in Christ, he is a new creation; old things have passed away; behold, all things have become new. Now all things are of God, who has reconciled us to Himself through Jesus Christ, and has given us the ministry of reconciliation, that is, that God was in Christ reconciling the world to Himself, not imputing their trespasses to them, and has committed to us the word of reconciliation. Now then, we are ambassadors for Christ, as though God were pleading through us: we implore you on Christ’s behalf, be reconciled to God. For He made Him who knew no sin to be sin for us, that we might become the righteousness of God in Him.

Email ThisBlogThis!Share to TwitterShare to FacebookShare to Pinterest
Labels: Behold I stand at the door and knock Rev 3:20, Blood on the doorposts and lintels, Exodus 12: 1 - 14 "your lamb shall be without blemish, The Passover in Easter