The original followers of God were Jews who are the children of God’s promise through Abraham and his son Isaac. Following the death and resurrection of Jesus many became known as Christians and the church flourished, spreading rapidly throughout the entire Roman Empire and eventually the whole world.

Now Satan having been confounded by Christ’s victory over him through his death and resurrection had lost his legal entitlement to this world that he had gained through the deception of Adam and Eve and the usurpation of their entitlement as first rulers of the earth. True to form Satan never rests. In 622 AD a new religion was formed by the apostle of a false Moon god called Allah by Mohammad, a distant relative of Ishmael the bastard son of Abraham and Sarah’s Egyptian slave woman Hagar. Unlike Abraham and Sarah’s son, Ishmael and his offspring were not to share in the promise that God had made to Isaac and his heirs. Therein lies the following tools that Satan used to create a false religion. Envy being the very foundation for the hatred of Jews and Christians begetting malevolence and murder as a directive from the Quran for the disposal of infidels. Islamics deny the one true God of Abraham, Isaac and Jacob and have instead embraced the demon god of darkness, the moon god Allah. They deny the divinity of Jesus Christ and most importantly they deny the fact that the Crucifixion and Resurrection ever happened, which clearly points to the spirit behind this evil religion who is Satan himself.

(1 John 4: 2 -3) This is how you can recognize the Spirit of God: Every spirit that acknowledges that Jesus Christ has come in the flesh is from God, but every spirit that does not acknowledge Jesus is not from God. This is the spirit of the antichrist, which you have heard is coming and even now is already in the world.

(Matthew 7:13) Jesus said, “Enter through the narrow gate. For wide is the gate and broad is the road that leads to destruction, and many enter through it.”

(1Peter 5: 8 - 9) Be alert and of sober mind. Your enemy the devil prowls around like a roaring lion looking for someone to devour. Resist him, standing firm in the faith, because you know that the family of believers throughout the world is undergoing the same kind of sufferings. 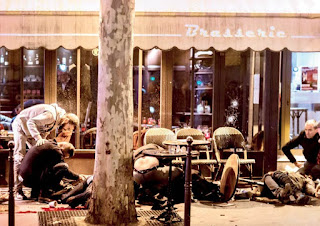 The recent attacks in Paris are not the work of a loving God or his followers, but is the obvious work of a demonically controlled group of Islamic State murderers who follow an evil belief system intent on taking the world back for Allah (Satan), and to eradicate all Christians and Jews from the face of the earth. I don’t soft pedal the truth and will never acquiesce to political correctness and religious tolerance for the likes of these evil ones. My heart goes out to those who have been duped into following them, they have a choice, perhaps some may see the light and step away.


Jesus said, (Luke 6: 45) “The good man out of the good treasure of his heart produces good, and the evil man out of his evil treasure produces evil;"
Posted by Joshua Stone - What Is at 3:10 PM

Email ThisBlogThis!Share to TwitterShare to FacebookShare to Pinterest
Labels: (Luke 6: 45) “The good man out of the good treasure of his heart produces good, and the evil man out of his evil treasure produces evil;", Satanic Religion