Weighed In The Balance And Found Wanting

This is the story of a man who defiled the things of God and embarrassed himself before thousands. However on close analysis we begin to realize that by his defiling behavior, he actually defiled himself before the Creator and lost everything as a result. This man was the polar opposite of Job who was tested by Satan with the approval of God. He lost everything but in his darkest moments he refused to curse or dishonor God who in turn returned to him all that he had lost and more as a reward for his faithfulness. Job is the man we would want to emulate.

(Daniel 5:1 - 6) King Belshaz′zar made a great feast for a thousand of his lords, and drank wine in front of the thousand. Belshaz′zar, when he tasted the wine, commanded that the vessels of gold and of silver which Nebuchadnez′zar his father had taken out of the temple in Jerusalem be brought, that the king and his lords, his wives, and his concubines might drink from them. Then they brought in the golden and silver vessels which had been taken out of the temple, the house of God in Jerusalem; and the king and his lords, his wives, and his concubines drank from them. They drank wine, and praised the gods of gold and silver, bronze, iron, wood, and stone. Immediately the fingers of a man’s hand appeared and wrote on the plaster of the wall of the king’s palace, opposite the lampstand; and the king saw the hand as it wrote. Then the king’s color changed, and his thoughts alarmed him; his limbs gave way, and his knees knocked together.

(Daniel 5: 13 - 28) Then Daniel was brought in before the king. The king said to Daniel, “You are that Daniel, one of the exiles of Judah, whom the king my father brought from Judah. I have heard of you that the spirit of the holy gods is in you, and that light and understanding and excellent wisdom are found in you. Now the wise men, the enchanters, have been brought in before me to read this writing and make known to me its interpretation; but they could not show the interpretation of the matter. But I have heard that you can give interpretations and solve problems. Now if you can read the writing and make known to me its interpretation, you shall be clothed with purple, and have a chain of gold about your neck, and shall be the third ruler in the kingdom.” Then Daniel answered before the king, “Let your gifts be for yourself, and give your rewards to another; nevertheless I will read the writing to the king and make known to him the interpretation. O king, the Most High God gave Nebuchadnez′zar your father kingship and greatness and glory and majesty; and because of the greatness that he gave him, all peoples, nations, and languages trembled and feared before him; whom he would he slew, and whom he would he kept alive; whom he would he raised up, and whom he would he put down. But when his heart was lifted up and his spirit was hardened so that he dealt proudly, he was deposed from his kingly throne, and his glory was taken from him; he was driven from among men, and his mind was made like that of a beast, and his dwelling was with the wild asses; he was fed grass like an ox, and his body was wet with the dew of heaven, until he knew that the Most High God rules the kingdom of men, and sets over it whom he will. And you his son, Belshaz′zar, have not humbled your heart, though you knew all this, but you have lifted up yourself against the Lord of heaven; and the vessels of his house have been brought in before you, and you and your lords, your wives, and your concubines have drunk wine from them; and you have praised the gods of silver and gold, of bronze, iron, wood, and stone, which do not see or hear or know, but the God in whose hand is your breath, and whose are all your ways, you have not honored. “Then from his presence the hand was sent, and this writing was inscribed. And this is the writing that was inscribed: mene, mene, tekel, and parsin. This is the interpretation of the matter: mene, God has numbered the days of your kingdom and brought it to an end; tekel, you have been weighed in the balances and found wanting; peres, your kingdom is divided and given to the Medes and Persians.”

Those with understanding know that the heart of each believer is the temple of the Holy Spirit of God and yet how often do we lose self control during times of testing and defile ourselves using the Lord’s name in vain. These are the times that we like Nebuchadnez′zar have become like wild beasts and have become like one of the wild asses and then are ashamed later knowing full well that once again we are experiencing the fallout of an evil and defiling habit. This is our Deja Vu moment of testing, I use the term Deja Vu because once again Satan has gone before God and asked to test us, but unlike Job we sometimes fail miserably and have entered into the company of the likes of Belshazar as we are measured in the balance and are found wanting. This needn’t be a continual repeat experience of ongoing failure and spiritual face plants. The answer is found in once again in coming to God with a contrite heart acknowledging our own weakness and requesting His grace to defeat this shortfall in our personality that we may wipe it away permanently and no longer be afflicted by it.
I have had a short fuse for certain kinds of nonsense and have suffered those explosive moments in the past, no one is immune to it!

So first of all we need to identify the triggers and willfully make ourselves aware of them each time they become apparent. Second we have to put on the armor of God. It is most helpful to memorize the following scripture verses and to bring them quickly to mind when temptation arises.
(Ephesians 6: 10 - 12) Finally, be strong in the Lord and in the strength of his might. Put on the whole armor of God, that you may be able to stand against the wiles of the devil. For we are not contending against flesh and blood, but against the principalities, against the powers, against the world rulers of this present darkness, against the spiritual hosts of wickedness in the heavenly places.
(2 Corinthians 10: 3 - 5) For though we walk in the flesh, we do not war according to the flesh. For the weapons of our warfare are not carnal but mighty in God for pulling down strongholds, casting down arguments and every high thing that exalts itself against the knowledge of God, bringing every thought into captivity to the obedience of Christ. When we begin to recognize that a test is eminent, then it’s time to turn the corner on it by recalling these verses and consider the example set by the Lord himself as He defeated the temptation of Satan. 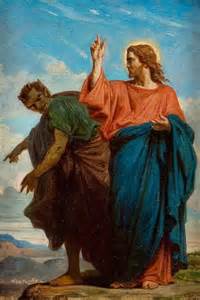 (Matthew 4:3 - 4)  Now when the tempter came to Him, he said, “If You are the Son of God, command that these stones become bread.” But He answered and said, “It is written, ‘Man shall not live by bread alone, but by every word that proceeds from the mouth of God.’”
Posted by Joshua Stone - What Is at 5:23 PM

Email ThisBlogThis!Share to TwitterShare to FacebookShare to Pinterest
Labels: Daniel 5: 1 -28, our Deja Vu moment of testing, Put on the whole armor of God, the temple of the holy spirit, Weighed in the balance and found wanting